How does an electric motor work?

This passage is going to talk about the followings of electric motor:

(2)The working principle of electric motor

(3)Where is electric motor used?

The advantage of a DC motor is that it is relatively simple in speed control. It only needs to control the voltage to control the speed. However, this type of motor is not suitable for operation in high temperature, flammable and other environments, and because the motor needs to use carbon brushes as a commutator component (brush motors), so it is necessary to regularly clean up the dirt generated by carbon brush friction. A brushless motor is called a brushless motor. Compared with a brush, a brushless motor is less power-saving and quieter because of the less friction between the carbon brush and the shaft. The production is more difficult and the price is higher. AC motors can operate in high temperature, flammable and other environments, and do not need to clean carbon brush dirt regularly, but it is more difficult to control the speed, because controlling the speed of the AC motor requires controlling the frequency of the AC (or using induction For the motor, the internal resistance is increased to reduce the motor speed at the same AC frequency), and controlling the voltage will only affect the torque of the motor. Generally, the voltage of civil motors is 110V and 220V. In industrial applications, there are also 380V or 440V. 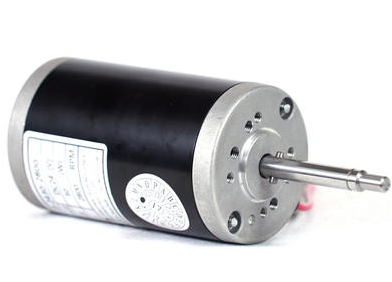 (2)The working principle of electric motor

The principle of rotation of an electric motor is based on John Ambrose Fleming’s left-hand rule.

The principle of a DC motor is that the stator does not move, and the rotor moves in the direction of the force generated by the interaction. The AC motor is the stator winding coil is energized with alternating current to generate a rotating magnetic field. The rotating magnetic field attracts the rotor to rotate together. The basic structure of a DC motor includes "armature", "field magnet", "snubber ring", and "brush".

The soft iron core of which the armature can rotate around the axis is wound with multiple coils. A field magnet is a powerful permanent magnet or electromagnet that generates a magnetic field. The collector ring is a collector ring with two semi-circular coils connected to about two ends of the coil, which can be used to change the direction of current as the coil rotates. Every half turn (180 degrees), the direction of current on the coil changes. The brush is usually made of carbon, and the collector ring contacts the brush in a fixed position to connect to the power source.

(3)Where is electric motor used?

Anything you can think of, as long as it is converted into electrical energy by mechanical energy, can be driven by an electric motor. Electric motors have many uses, ranging from heavy industries to small toys. The conveyor belts of factories and hypermarkets, the electric automatic doors and electric rolls on common cars are also driven by electric motors.